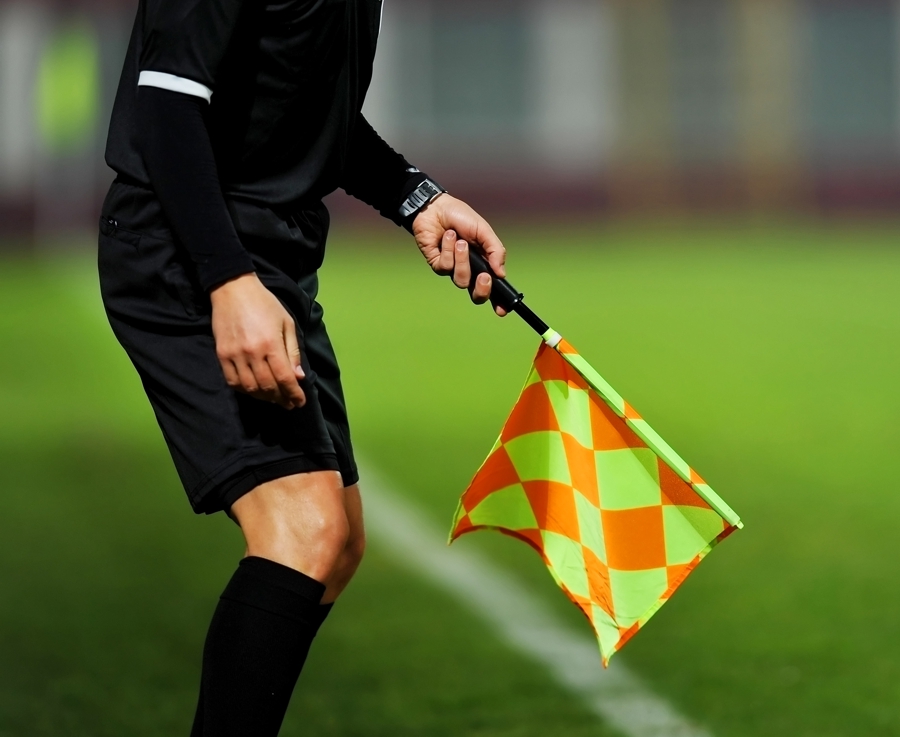 As a youth, you may have dreamed of competing against other children in sports. It was exciting to play against friends, neighbors or school rivals. Playing a sport as a child was fun. Practicing in your driveway or at the gym with friends led to spending hours "perfecting your craft."

While young athletes practice and prepare for their season, another group also prepares for the same season—sports officials, or as some call them, the refs. Many of the men and women who wear the zebra stripes officiate so they can stay around the game, even though they are no longer playing. The noble desire to give back to youth or high school sports is another reason cited by some officials. However, many are experiencing the downsides of officiating, which may lead them to pursue other forms of income instead.

While this trend can be reversed, we have to first understand the current landscape and take the steps needed to save the profession. If this trend continues, there will be no one to replace these officials when they retire from making calls on the field. Previous data suggests that in addition to the rising age of officials, other reasons why their number is dwindling can be attributed to pay, safety and respect.

There is no denying that the "side hustle" has come into popularity. Depending on the sport, an official can pocket $25 to $75 per game. It is also a great way to network with fellow refs and get exercise at the same time. One can gain and learn valuable life skills such as communication. integrity and hard work.

Sports officials spend more than 25 hours in the classroom to earn a permit to officiate youth sports. After officials are certified, they spend hours watching films, reading rulebooks and studying the mechanics of their sports. Adding to those costs are indoor or outdoor training, up to $300 for equipment and uniforms and other expenditures. The time and money officials put into "perfecting their craft" is often overlooked compared to the rate they will eventually be paid.

Those who hire for these positions need to revisit the topic of pay rates for officials. Times have changed. When people pick up a side hustle these days, they expect to be rewarded with a fair pay rate. After all, they have choices. Many places of employment these days are having a hard time attracting younger employees. If they cannot recruit people, they cut services or hours of operation.

Consider this baseline: A third-party delivery driver (DoorDash, Uber Eats, Grubhub) can make on average $19 an hour working when they want and wherever they want. Sport leaders need to understand that people have choices for why they pick up a side job. They need to make officiating more attractive, as the competition outside of sports will make an appealing pitch for new workers.

Officials should receive higher rates for varsity games, and state associations could even consider reimbursing for mileage. This will help with travel and be appropriate compensation for calling games at any level.

Doug Abrams, an expert in youth sports, has been noticing the exodus of referees for years: In the article "Can We Improve the Culture of Sports?" Abrams contends that officials quit in droves each year due to incessant verbal, and sometimes physical, abuse inflicted by coaches and especially by parents.

In order to change a culture, new structures are needed to support the desired outcomes. In the case of sports, everyone seems to agree that the primary focus must be player safety, but that shouldn't be the only focus.

With an incident taking place more than once every 10 games, administrators should be more concerned for the safety of officials.

As mentioned, officiating is a part-time position often undertaken for altruistic reasons. As a result, risk of harm is a high deterrent to effective recruitment and retention of officials. Sports officials feel that coaches should receive a refresher course on the rules of each sport but from an official's perspective.

One of the main reasons for the decline in officiating begins with the fans. According to Ohio University, poor behavior from spectators is cited as the No. 1 reason officials quit. There has been an increase in verbal and physical abuse from parents, grandparents, friends, relatives and even coaches. Some sports officials have been grabbed, kicked, punched, head-butted and tackled, and the list goes on.

"Never in the history of sport has an official changed their call because someone yelled, abused, berated or pushed them," said Donna Richardson who has 40 years of officiating experience for field hockey, women's lacrosse, men's and women's basketball, volleyball and fast pitch softball at the youth through collegiate levels. "It won't happen in the next game either."

Every official will tell you that they are not perfect, and they make mistakes just like the athlete and coaches in a game. Officials will work to learn from their mistakes and to "perfect their craft" for the next game.

Now more than ever, there is a need for the younger generation of men and women to give back to youth sports and pick up a whistle. Think about what youth sports and high school sports will look like if there are not enough sports officials willing to participate. Signing up is as easy as visiting your state sports association website or through naso.org, a resource on becoming an official.

Eric Thompson, a 16-year Ohio High School Athletic Association (OHSAA) football official, shared that he got into sports officiating because his brother, Mark Thompson, had already officiated for a few years. Mark talked favorably about officiating, and it spurred Eric to join.

The younger generation of men and women is not stepping up to become sports officials, reports the National Association of Sports Officials (NASO). This has resulted in many schools and teams playing games with fewer officials than normal. At times, sports contests are cancelled or rescheduled due to some school districts dropping certain sports because of a lack of officials.

Twelve-year OHSAA official Steve Marchal said he got into officiating when his son got older, and he wanted to stay active in sports. He signed up for a basketball officiating class and has loved every minute of it since. He has even picked up officiating other sports like baseball and football.

Third-year basketball official Daniel Morrison said he got into officiating to build relationships and professionalism among coaches, players and administrators. Morrison quickly realized that officiating is a difficult challenge and a thankless job, but he is able to stay connected to the game and work to build a good rapport with others.

Understanding the motivation of officials is important. Officials feel good about staying close to the sport they care about. It is also a good way to stay fit. However, the obvious negatives include the verbal abuse of coaches and parents, and the pay, which is less than minimum wage. It is not unusual to have a coach in front of his team preempt a fight on the court, or a parent walk with the official to their car hurling abusive accusations. All of this for low pay makes one question why anyone would do this job.

There is sometimes lack of changing rooms or bathroom facilities. Refreshments are not usually provided. Parking issues can arise and getting an escort back to your car due to safety concern tends not to happen on a regular basis.

Besides pay, safety and respect, head officials and administrators are dealing with other issues that need to be addressed. The pathway to advancement is unclear and, on occasion, jealousy amongst officials has been observed. Both are further deterrents to retaining existing officiating staff.

There is an entrenched network where assignors have been receiving benefits to continue to place the same officials in high school games and state playoff games. This benefits older, more experienced officials.

In other occupations, the employee is either improving, remaining the same or getting worse. Many experienced officials are no longer growing by going to summer camps and putting in the extra work to stay fresh and current. Few are willing to mentor and champion young officials, in fear they will lose their jobs to young, motivated talent.

The best way to get ahead might be obvious—be a good referee by getting the calls right and communicating, by being likable and by avoiding conflict with coaches, players and fans. Communication is especially important with the person who assigns the games. After all, it's the athletic director who signs the paycheck.

There is more that can be done to get ahead in officiating. For example, get started early. While in college, consider signing up to officiate youth sports like Little League baseball, and intramurals. Realize some things will be out of your control, for example situational factors such as height and age in certain sports. Other conditions such as league pushes toward a diverse workforce could be another factor that works in the favor of the candidate or not. A candidate should perform to their best ability, keeping in mind that other people have agendas. Fit and advancement isn't always about skill.

According to a 2019 survey conducted by Officially Human; Behind the Stripes, there is a nationwide shortage of youth and high school sports officials. This organization was founded to restore respect to, and encourage positive treatment of, sports officials through increased education and communication to all stakeholders (administrators, coaches, fans).

Only 12% of officials are younger than 34 years old, and the average age of an official is more than 53. Officially Human; Behind the Stripes, is actively working to recruit and retain new officials at all levels.

The younger generation of men and women is not stepping up to become sports officials, reports the National Association of Sports Officials (NASO). This has resulted in many schools and teams playing games with fewer officials than normal. At times, sports contests are cancelled or rescheduled due to some school districts dropping certain sports because of a lack of officials.

Officials have an avid passion for the game, and they will tolerate a great deal of stress to stay around the sport they love. Pay can only do so much. If officials are harassed both verbally and physically, the men and women who choose to officiate will simply hang up their whistles.

Author's Note: The COVID-19 pandemic that began in 2019 exacerbated the issues presented in this paper. They preexisted the pandemic, however and should not be considered a product of the current economy or political climate. RM

Where Do We Go From Here?

In the future, there will be a shortage of officials, and that will change the landscape of youth and high school sports. These few steps would go a long way to making officiating an appealing option:

Short Term (in the next year):

A "Game Called System" can be used in event that the official or officials don't feel safe to continue officiating that game due to verbal or physical attacks from players, coaches or fans. The team that is winning at the moment will automatically win the game.

After the game is called, the officials will be escorted to their cars by game management or administration, if needed.

As soon as possible, the officials must send separate reports to their assignor stating exactly what happened. The assignor will then decide if the report gets sent to the state association.

If game film is available, then that must be obtained to show proof.