While thinking about the wonderful memories I have with my husband and son, I often reminisce about our summer days spent at Otter Cove Aquatic Park in St. Charles, Ill.

When my son was just a toddler, I remember one of the first times we visited Otter Cove, which, at that time, was only a splash park. His eyes lit up when he first saw the many exciting features there—the colorful dumping buckets, spray loops, spray cannons and water wheels. It was a joy to see him instantly take on the various water elements—running, giggling and showing eagerness to explore the workings of each one.

Years later, Otter Cove has grown into a massive outdoor waterpark with so much to do. To name just a couple of the attractions there, the Dragonfly Den Toddler Pool, designed for children ages 5 and under, offers an interactive water play feature, while the Crayfish Canal boasts a 25-yard lap pool with eight lanes for more experienced swimmers who want to enjoy a good water workout, as well as two 1-meter diving boards and drop slides.

Other key features of the aquatic park include an activity pool that has zero-depth entry, water geysers, a dome waterfall, a frog slide, a spinning spray water feature and a body slide. In addition, the facility has a concession area, as well as shade structures that provide some protection from the sun. 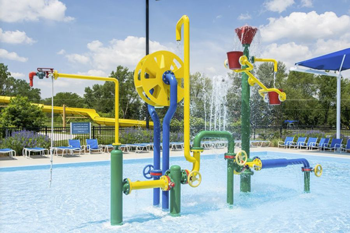 The creation of the state-of-the-art aquatic facility began after voters approved a $25 million referendum in February 2008. Otter Cove Aquatic Park officially opened for business in 2011.

And, over the years, Otter Cove has continued to be a regular summer outing for my family. Whether it's just for a dip in the pool for a couple of hours in the evening or for a full day on the weekend, we enjoy everything from the waterslides and diving boards to spending time relaxing in the lazy river (Turtle Creek). The lazy river can be accessed either by the tube slide or through the zero-depth entry. In addition, it features dumping buckets and spray cannons.

I am thankful for Otter Cove Aquatic Park, for the opportunity it gives my family to build lasting memories together year after year, and a place to cool off on a hot summer day. RM

Is there a park, recreation, sports, fitness or aquatic facility that has had an impact on your life? Tell us all about it! Send an e-mail to emily@recmanagement.com to find out how you can express your gratitude here.