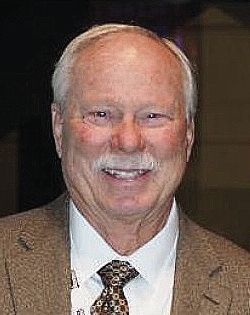 During the summers while attending college, Steve Wightman began working for the City and County of Denver Parks and Recreation Department.

"I was assigned to the citywide maintenance department, which maintained all of the city buildings and facilities. It was a great summer job because I worked as a helper for the skilled trades and learned a lot about electrical, plumbing and general maintenance. And, more importantly, I got to know the director of parks and recreation," said Wightman, who recently was inducted into the Major League Baseball's Groundskeepers Hall of Fame.

"To be honored by my peers makes this extra special because they all know what goes into maintaining a Major League Baseball field. It is truly very humbling," he said.

"I think, for me, the recognition from my peers for this great honor is a validation of my career as a baseball groundskeeper," he said. "I know that no one has a career by himself and that there are many people whom I have had tremendous help from that has allowed me to stand alongside of those previous honorees. I can never thank the Major League Baseball Groundskeepers Hall of Fame enough for this honor. It is, without a doubt, the highlight of my career in sports field management."

Back when Wightman graduated from college with a degree in marketing, finance and economics, he spent a year and a half in Tucson pursuing a career in the banking industry.

"Realizing very quickly that I didn't enjoy being inside behind a desk and on the phone all day, I returned to Denver where I was offered a job as the maintenance supervisor of ballfields for the Denver Parks and Recreation Department," he said. "I consider this to be my first introduction into managing sports fields and believe that this opportunity was a direct result from my summers as a seasonal laborer with the Parks and Recreation Department."

In the fall of 1976, Wightman was hired as field manager at Mile High Stadium, which, at the time, was owned and operated by Denver Parks and Recreation, and was home to the Denver Bears (a triple A baseball club) and the NFL Denver Broncos. He quickly realized that managing a professional baseball and football field required much more knowledge than a business degree, so Wightman called Dr. Jack Butler at Colorado State University for help.

"He became an important mentor and good friend during the early years of my career," he said, adding that he attributes much of his success to the Sports Turf Managers Association (STMA), and that the STMA became the cornerstone of his career. In fact, Wightman served as STMA's fourth president from 1985 to 1987 and continued to serve STMA as a board member of the S.A.F.E. Foundation and as a member of the Historical Committee.

"What was appealing for me was working outdoors creating safe and aesthetic playing fields for all of the users from 8 to 80 years old. I enjoyed it so much that it turned into a 39-year career from the recreational level to the top of the professional level of Major League Baseball and NFL football," he said.

As maintenance supervisor of ballfields in Denver, Wightman maintained recreational baseball fields, soccer fields, football fields and rugby fields. "I learned the basics of ballfield maintenance for virtually every type of outdoor sporting event that became the initial stepping-stone of my career," he said.

Wightman said groundskeeping at the professional level requires the ability to manage various types of turfgrass in various seasonal conditions. "It also requires a comprehensive knowledge of soil science and water management. It requires attention to every detail that goes into field performance and aesthetics," he said, adding that it also requires communication with players and coaches in meeting their expectations around playing conditions.

In 1988, Wightman was hired as field manager at San Diego Jack Murphy Stadium (later renamed Qualcomm Stadium)—owned and managed by the city of San Diego with the Padres, the Chargers and San Diego State University Football as leasing tenants.

Following each event, the field required a certain degree of repair before the next event which, in many cases, was just hours later. "I have always considered there to be nine main aspects that go into quality groundskeeping: mowing, irrigation, fertilization, aeration, topdressing, pest control, soil management, crisis management and communication," said Wightman, who, now retired, enjoys golf, the beach and his grandkids, with some travel here and there.

"Throughout my career I have tried to optimize each of these as best I could," he added. "There are numerous variables that go into groundskeeping, and to master them all is an elusive venture. However, continually striving for perfection is the goal."