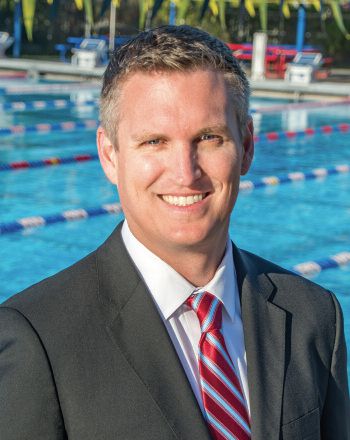 When Dawson Hughes was a kid, and when he wasn't in school, he was always participating in sports.

"I played just about every sport imaginable and had the benefit of outstanding recreational facilities in my hometown. Swimming was the one constant and, as college approached, swimming became my primary sport," said Hughes, who in March 2016 was selected as the new CEO of U.S. Masters Swimming (USMS) in Sarasota, Fla., a national membership-operated nonprofit organization that provides membership benefits to nearly 60,000 Masters swimmers across the country.

Masters Swimming began officially in May 1970, after a Navy doctor in San Diego by the name of Captain Ransom J. Arthur, M.D., convinced John Spannuth, who at the time was president of the Coaches Association, to hold the first National Masters Swimming Championships in the Amarillo Aquatic Club pool, according to information from the USMS website. Arthur believed that if the incentive was appealing, it would give older swimmers (both ex-competitors and beginners) a goal for keeping fit.

Hughes' interest in swimming and athletic ability paved the way for him to become a member of the Wolverines swim team for two years at the University of Michigan, where he graduated with a bachelor's degree in political science. After concluding his swimming career, Hughes spent his junior year studying overseas at the University of New South Wales in Sydney, Australia.

Hughes said that after he graduated, "It was clear my athletic ability wasn't going to provide an income, so I decided I wanted a career in the business of sports."

He attempted to solicit interviews through letters to business department heads at professional sports franchises. "Eventually, I did get a start in ticket sales with the San Diego Padres," he said.

With his background in the recreation industry having involved sports entertainment sales and marketing, he spent almost nine years in Major League Baseball with the San Diego Padres and Kansas City Royals.

"That experience led to an opportunity running business development for the Orange Bowl Committee, the nonprofit host of the annual college football postseason game, the Capital One Orange Bowl," he said. "The experience in nonprofit management, business development and marketing, as well as my swimming background, proved to be a great fit to help guide U.S. Masters Swimming."

Hughes noted that his career in the recreation business officially started last April, when he joined U.S. Masters Swimming.

"I could never have imagined a career path that would allow me to return to the swimming community and be part of a sport that had been so important to me growing up," he said. "Now, I can't think of anything I'd rather be doing."

When asked what he thinks is his greatest accomplishment as a recreation industry professional, Hughes said it remains to be seen due to his short time with USMS.

"However," he said, "I look forward to working with our passionate USMS volunteers, supporting our coaches, expanding the benefits we provide to our members, and continuing to build on the strong Masters Swimming communities around the country."

When it comes to recreation activities that he personally enjoys, Hughes noted that he and his wife, Kelly, grew up on the beach in Southern California, and now spend their weekends with their 4-year-old twins enjoying the parks and beaches in Sarasota.

"Not surprisingly, we also make regular use of the local aquatic facilities for swim lessons, Masters Swimming workouts, and letting the kids play in and around the water," he said.

When asked what advice he would give to those who are just beginning their careers in the industry, Hughes said: "Always provide the level of service you would appreciate receiving, both with customers and with your stakeholders. You never know when or how that extra effort will pay off."

USMS and its 52 Local Masters Swimming Committees (LMSCs) provide director support to more than 1,500 Masters Swimming clubs and workout groups. The structure and organization of USMS programs vary and are driven by factors such as pool availability, instructor or coach availability, community support, and finances, according to information from the USMS website.