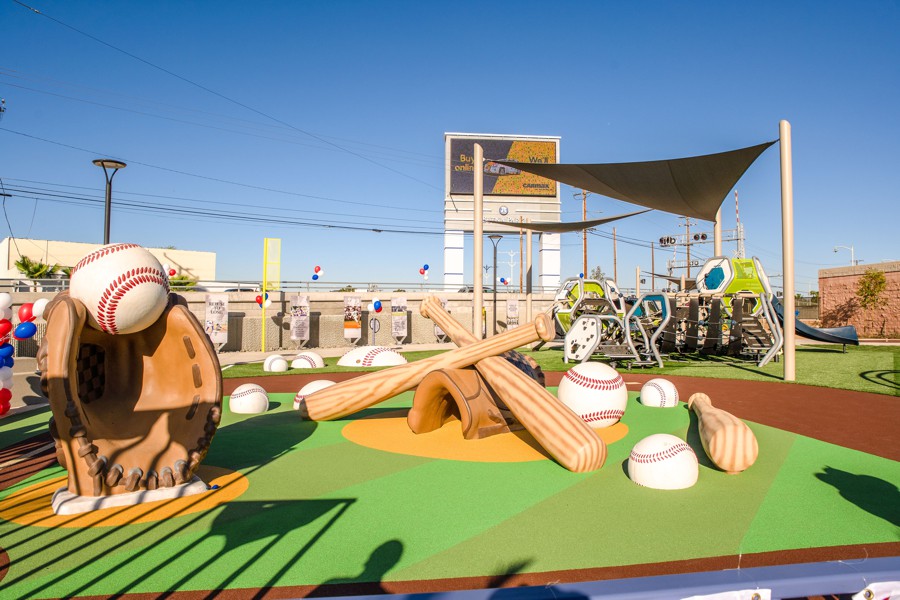 Rick Gomez Park is named after a true Buena Park hometown hero. Rick Gomez lived in Buena Park his entire life. He was always a popular coach, teaching children year after year, both baseball and football skills. Rick first started volunteering for the city in 1991 as a Park & Recreation commissioner. For 28 years, and until his passing, Rick was a devoted volunteer and leader. Rick served as chair of the Park & Recreation Commission frequently and mentored the incoming chair and new commissioners with his city and program knowledge and experience.

So of course the city's newest park, named in his honor, has a sports theme. Giant baseball glove sculptures, baseball glove tunnels, and giant bats to scramble over and climb up are the focal point of the park.

It is said that in order to make a difference in someone's life, you don't have to be brilliant, rich, beautiful or perfect. You just have to care. Rick cared. Every year, the city would receive far too many requests from players to be placed on his team. He would have had to coach two to three teams to accommodate the requests. The park features Rick Gomez tribute panels to honor his dedication to the Buena Park community.

One thing Rick did every year before the big tournament was to personally visit every player's home late at night and leave a sign on the front porch with words of inspiration. The sign would be small, but the words impactful: "Go, Robert!" or "Good Luck, Jennifer." When the players woke up in the morning, they would run to the front porch to get their special sign, the sign made specifically for them by Coach Rick. Located at 7501 8th Street, the park also features a grassy area, barbecue grills and picnic tables and an area with outdoor fitness equipment. It is the city's first new park in more than 25 years.

The city is excited to bring this project to fruition for the community. The city began holding community workshops to solicit input from residents in 2019 and formally broke ground on the park on May 22, 2021. The project was partially funded by a contribution from Providence St. Jude Medical Center as well as funds from the State of California.

The city will always be grateful for Rick's dedication to his community. He will be missed for his quick-witted humor and the genuine love he had for Buena Park. Instead of a ribbon cutting, city officials threw out a first pitch. A fitting honor for a true hometown hero!