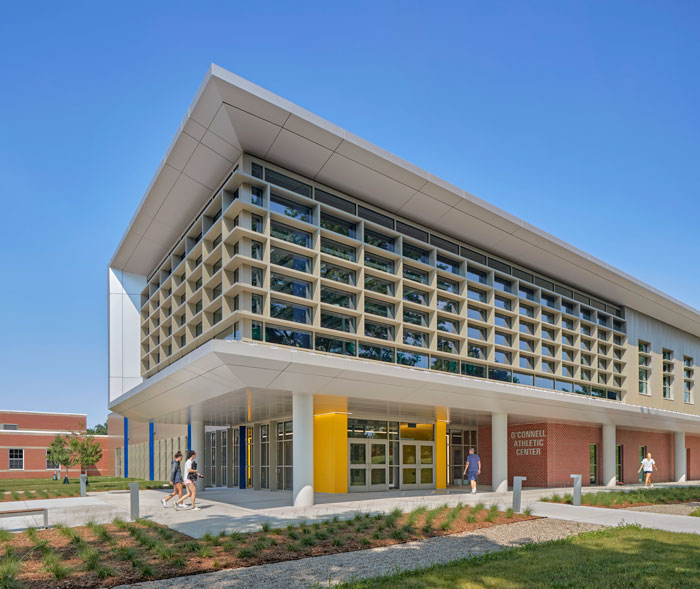 Founded in 1932 by the Sisters of Mercy of Connecticut, the University of Saint Joseph in West Hartford, Conn., was the first liberal arts college for women in the area. But in 2018, the historically all-female university became co-educational. This began a new phase for the school, during which it worked to incorporate men into its programs.

As part of this transition, the school also looked to increase the number of varsity sports it offered, and the school engaged JCJ Architecture to renovate and expand its existing athletic center in order to better accommodate the growing student body into various athletic and social programs.

Completed in 2021 and dedicated on Sept. 29, 2021, the $16.2 million renovation and expansion created a new, energized, central basketball arena, four new locker rooms for women and men, and a new state-of-the-art strength and conditioning center, along with updates to the original building. In addition to expanding space for athletics, the new expansion helps address the needs of a growing number of students pursuing degrees in athletic training, sports management, or physical education and sports studies.

Men’s Basketball Head Coach Jim Calhoun told a local news affiliate that the expansion isn’t just exciting for the basketball teams, but also for the school. “There are so many students coming through here now, and as we start to expand on our athletics and recreation, you’re going to get kids that will continue to make this expansion into a very special place.”

“The gymnasium, the physical fitness room, there’s all kinds of stuff to look at. Another thing is that the student-athletes hang out here a lot because it’s so comfortable; they all get to see each other. It’s really a wonderful meeting place, and hopefully, a very good winning place as we get into the winter months.” Calhoun added.

JCJ’s forward-looking design solution signals the institution’s commitment to reinventing itself, reconciling the traditional red brick colonial aesthetic of the existing campus buildings with a modern and dynamic new facility. The resulting design marries the red brick materiality and yellow doorways that are a hallmark of all buildings on campus with sleek and modern glass forms, clean lines, cantilevers and projections. The facility as a whole establishes an energetic visual focus at the end of the campus.

In addition, JCJ aimed to reshape the traditional athletic facility into a flexible and inclusive campus amenity. The program hinged on the creation of a full NCAA regulation basketball court, but goes far beyond that, as the school’s leadership wanted a facility that would be beneficial for the full campus community and provide social opportunities outside of athletics.

The facility is situated directly across the street from the Student Center, creating a central hub for student activity. The main lobby serves as both a ticketing and concessions area for game nights and a comfortable space with high-top tables and casual furniture for students to study or socialize. Additionally, the student health services suite, formerly housed in a smaller outlying building, now resides on the ground floor of the new facility.     RM