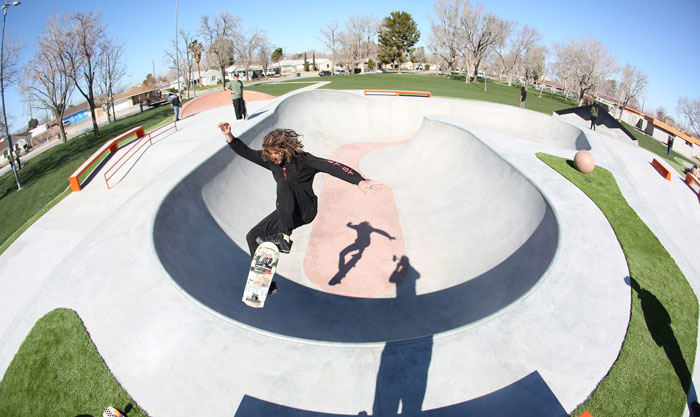 Skateparks and bike parks can be a huge benefit to communities, essential to revitalizing an area and offering a fun and safe environment for skateboarders and BMX riders looking to expand their skills. To get a skatepark or bike park up and running requires a solid idea from the start as well as community support to successfully see the project to the end.

“In a lot of ways a skate or bike park project follows the same fundamental development process as other parks infrastructure,” said John Hunter, vice president of a company in Joplin, Mo., that designs and builds skateparks and bike parks.

However, there are some unique aspects to both skatepark and bike park development that differ from many other types of facilities. “Unlike a baseball field or tennis court, there is no standard layout or dimensions for either a skate or bike park, so the process of conceptualizing the size, layout and ‘vibe’ of the park is much more involved and organic,” Hunter said. “Often, a skate or bike park will have more interest and engagement from the user group, which is especially helpful when soliciting input into the design or working to excite the broader community about the development of the project.”

When it comes to cost, “Project costs vary greatly depending on things like size, style and construction type. So, while there is not a quick and easy cost formula, it is promising to note that a project can be developed at almost any budget. A neighborhood-sized skatepark or bicycle playground can start at $50,000, and a regional skate or bike park can cost several million dollars,” Hunter added.

To get a public skatepark built, there are some steps that you can follow. A Los Angeles-based skatepark design and construction firm offers a skatepark development guide that lists “define your vision” as the first step. “Every successful project begins with a clear vision.” And, “… Establishing the general style and size of skatepark you want is the first step in raising community support and showing municipal officials that you are approaching the project seriously and realistically.”

Other steps in the process include site selection, developing a concept design and target budget, fundraising, design and construction, and, finally, go skate!

Vince Onel, principal and vice president of development at a Los Angeles-based skatepark design company, noted the growing popularity of skateboarding and that it is “more mainstream and popular than ever. Skateboarding is no longer a fringe activity for teenage boys. It’s an Olympic sport with diverse participation across gender, race and age.”

Deciding on a location is another important consideration when planning a skatepark or bike park.

“The selection of a site is very dependent on the project goals. Deciding the scale of the park development and whether the plan is to serve as a small neighborhood park, a regional destination or anywhere in between will guide many decisions in site selection,” Hunter said.

“No matter the size of the park, it is always good practice to select a site that is as accessible as possible by a park user who may choose to commute to the park on their board or bike. Once built, these parks become very popular and often participants will spend hours every day using the facility, so having amenities adjacent to the skate or bike area is a big plus when planning a site,” he added.

Some fundamental considerations include bathrooms, sitting areas with shade and water fountains. “Even lighting is worth considering, especially in climates where daytime temperatures get too hot to comfortably and safely use the facility,” Hunter added.

“Since a skate or bike park has no set facility layout or design, an undulating or asymmetrical piece of property can be an ideal location for development,” he said. “Unlike a baseball field or tennis court, the design team has the opportunity to work with the uniqueness of the land instead of against it.”

Important criteria to consider when choosing a site include visibility, accessibility, design canvas, barriers to shovel-ready, amenities and infrastructure, and environmental impact, as indicated in the skatepark development guide mentioned previously.

For example, when considering visibility, “Is the site surrounded by other active areas, giving users the sense that eyes could be on them at any given time?”

When determining accessibility, “How centralized is the site? Is it on the outskirts of town and difficult for the majority of residents to access?”

For the design canvas, “Is there enough space to achieve the desired square footage? Is there potential for future expansion?”

And, when considering the environmental impact, “Would use of the site for a skatepark conflict with other activities within the overall space? Would a skatepark displace an existing recreational activity?”

There are different types of skateparks and bike parks, with skateparks being “generally categorized by size and terrain type,” Hunter said.

“Skateparks are broken down by size as skate spots, neighborhood and regional skateparks,” he added. “The terrain designed into the park is split into three categories: transition, street and flow. Often, a skate spot will consist of just a few street features, or a large regional skatepark will have a combination of all three terrain types.”

When it comes to bike parks, they are “broken down into categories generally by user type/style and age/skill level,” Hunter said. “The most common types of bike parks are bicycle playgrounds, pump tracks, skills courses, jump lines, gravity flow and trail networks. A larger ‘bike park’ may contain a combination or all of these individual facility types.

“One of the fastest-growing trends in bike park development is in asphalt pump tracks and asphalt flowlines,” Hunter said. “The Railyard and Runway Bike Parks, both in Northwest Arkansas, are both world-class examples of these revolutionary facilities. While dirt parks and pump tracks are still popular and have a lower cost of development, the rise in these lower-maintenance pump tracks and bike parks is an emerging trend.”

What’s more, “An added benefit of a hard surface bike park or pump track is that it can be enjoyed by all wheeled users like skateboarders, scooter riders or even riders on roller blades, opening up a whole new segment in action sports,” he said.

In August 2019, Newark, Ohio, added a new place for skateboarders and BMX bikers to gather—Everett Park Skatepark. “Part of our foundation’s core mission is to focus on the education, health and well-being of youth. We have lots of recreational fields placed throughout our community for softball, baseball, soccer, basketball, etc. We saw a gap for youth that didn’t play traditional sports. There was a large population of BMX bikers and skaters that had no place to go except in our downtown area. They were always being chased away by local businesses. We wanted to create a venue that was designed for them,” said Jennifer W. Roberts, executive director of the Thomas J. Evans Foundation, as well as the Newark Campus Development Fund and Gilbert Reese Family Foundation.

“The Thomas J. Evans Foundation partnered with the city of Newark to build a 16,000-plus-square-foot skatepark for various types of wheels, including bikes, skateboards and scooters. Once the skatepark designer and builder was chosen, we held a community meeting, which was advertised on social media outlets to get as big of a crowd as we could. In attendance were community leaders, over 75 youth, parents, and neighbors to the park,” Roberts said.

Participants were given the opportunity at the meeting to choose elements that they would like to see at the skatepark. “From this meeting, we created a distribution email list to update participants,” she said. “We also had a Facebook, Twitter and Instagram page specifically for updates to the construction of the park. We have had several meetings with city officials, local bike shop owners, and neighbors to the park to hear their ideas. As a whole, the community was very excited about the building of a skatepark in Newark, and is therefore very supportive of our efforts.”

In addition to the skatepark, a community garden, dog park, playground, practice baseball fields, as well as a pavilion and restroom facility were added.

“This was an opportunity to lift up a large park that had been neglected for a long time. It is a beautiful attraction for the local neighborhood community. It is also now a destination for the skaters and bikers from throughout the state,” Roberts said.

The skatepark, which had a formal dedication on Aug. 24, 2019, “was designed to serve all wheels,” she said. “Our community has an equal mix of BMX bikers and skateboarders as well as scooters and inline skaters. We also wanted the park to serve all ability levels.”

The skatepark features a pump track, a bowl that ranges from 4 feet to 7 feet deep, and a full-pipe section, which is 18.5 feet tall from top to bottom. In addition, there is a large streetscape that includes ramps and rails [at] different entry points into the park.

When asked how the community has responded to the skatepark, Roberts said it has been well received. “The thing I was most surprised by was that it brought a variety of different communities and types of people together,” she said.

“It was a safe place to share a love for biking and skating. A community has been created where people will come out and sweep out/blow out leaves in the fall, pick up trash and work to keep it a clean, safe place to gather,” she added. “Young adults teaching younger youth how to do tricks, etc. It is still heavily used. Organic competitions have emerged, hosted by different groups at the park since its opening.”      RM