By the Numbers: Aquatic Survey Respondents

If you're a long-time reader of Recreation Management, you likely are familiar with our annual State of the Industry Report, where we delve deeply into the who's, what's, where's and how's of recreation, sports and fitness facility management. In this issue, we introduce more specific research into the aquatics industry.

The responses represented here are the result of a separate survey sent specifically to respondents whose facilities include aquatic elements, from swimming pools to splash play and more. We'll be reporting the results in this and upcoming issues.

This month, let's take a look at the basics: Who are our aquatic survey respondents, and what types of pools and aquatic facilities do they represent?

Nearly three out of 10 (29.1 percent) respondents to the survey were from the Midwest. This includes Illinois, Indiana, Iowa, Kansas, Michigan, Minnesota, Missouri, Nebraska, North Dakota, Ohio, South Dakota and Wisconsin. The second largest number of participants were from the West, with 23 percent of respondents reporting in from Alaska, Arizona, California, Colorado, Hawaii, Idaho, Montana, Nevada, New Mexico, Oregon, Utah, Washington and Wyoming. 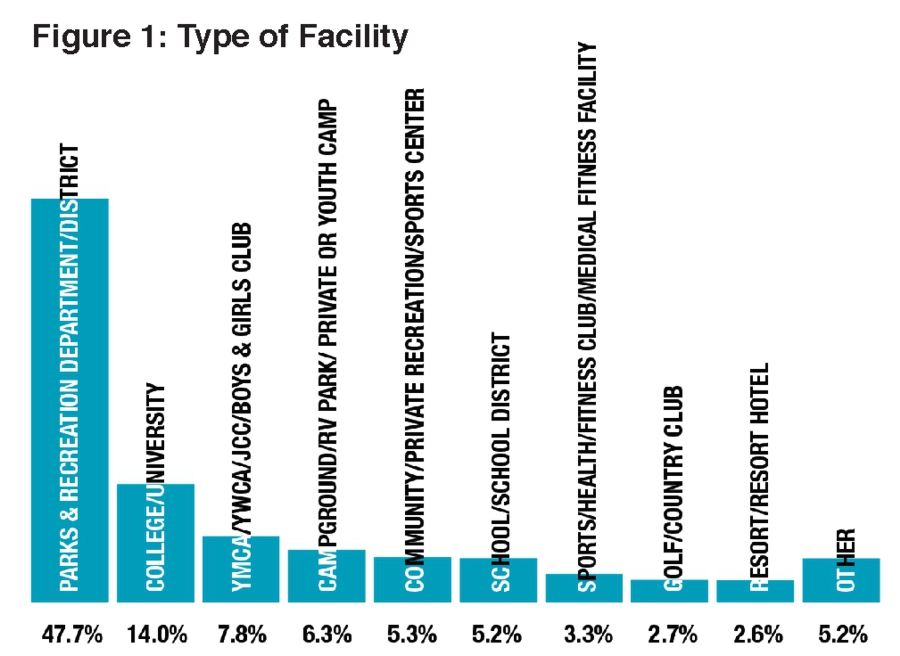 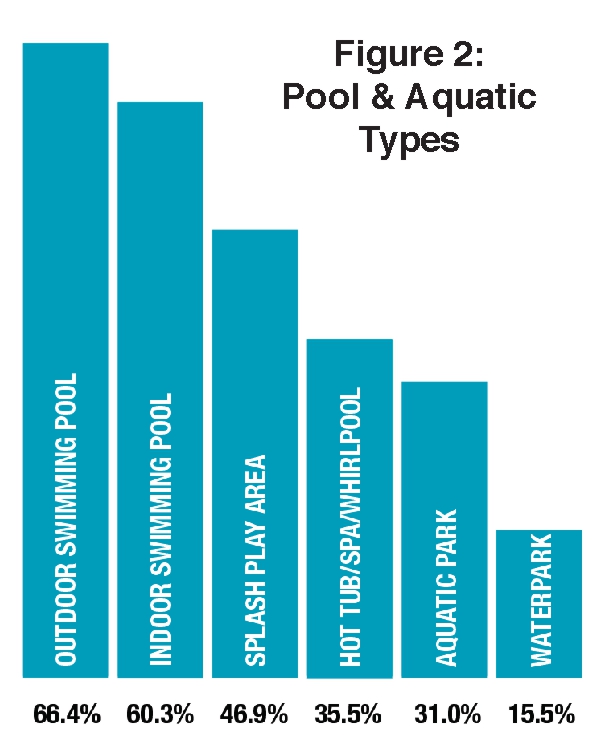 When it comes to the type of facility represented by respondents, parks and recreation departments and districts were the most common, with nearly half (47.7 percent) of respondents indicating they worked for parks and rec. (See Figure 1.) They were followed by colleges and universities (14 percent); YMCAs, YWCAs, JCCs and Boys & Girls Clubs (7.8 percent); campgrounds, RV parks, and private/youth camps (6.3 percent); community or private recreation and sports centers (5.3 percent); schools and school districts (5.2 percent); sports, health and fitness clubs, and medical fitness facilities (3.3 percent); golf clubs and country clubs (2.7 percent); and resorts and resort hotels (2.6 percent). Another 5.2 percent of respondents were from other types of facilities.

A majority of respondents (59.2 percent) indicated that their aquatic facilities are open year-round, while 40.8 percent reported that their operations are seasonal. (See Figure 3.)

In the coming months, we will delve more deeply into the responses from our aquatic respondents, taking a closer look at the amenities and programs they include as part of their facilities, their operating budgets, drowning prevention, water and chemical conservation, and more. Next month, we'll dive into aquatic respondents' top concerns and what they consider to be the top issues currently facing the aquatics industry. Stay tuned!