By the Numbers: Challenges & Concerns 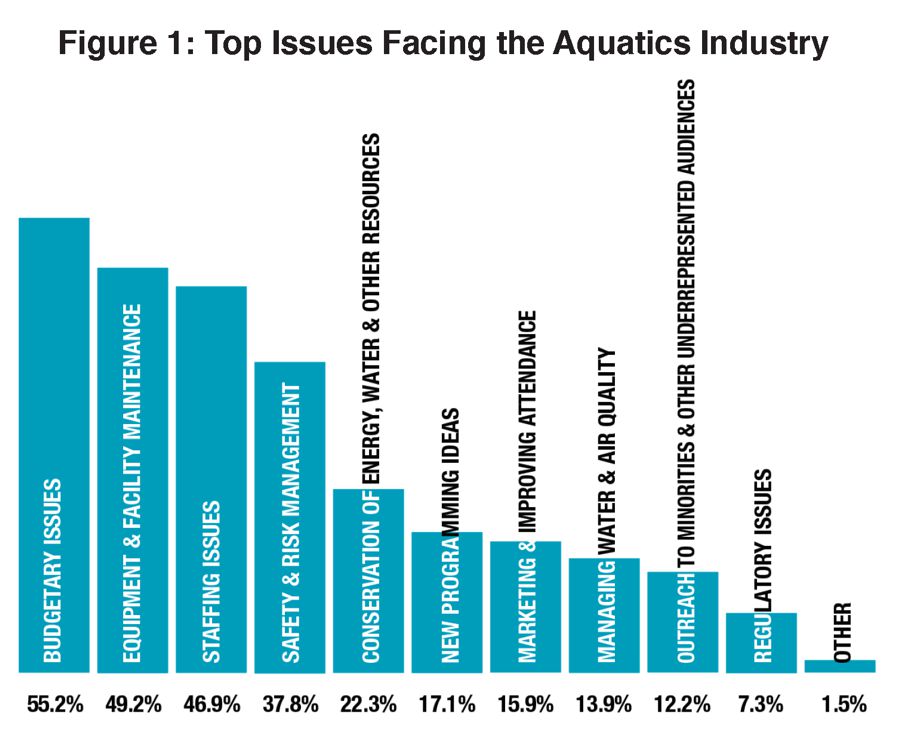 With so many moving parts involved in their daily operation, from staffing and programming to water management and equipment maintenance, aquatic facilities can present overwhelming challenges to facility budgets. That's why it comes as no surprise to find that budgetary issues are far and away the most common top issue facing the aquatic industry, according to respondents to the Aquatic Industry Report survey.

More than half (55.2 percent) of respondents said budgetary issues were the top issue facing the economy. And, closely related to budget issues, equipment and facility maintenance and staffing issues took the No. 2 and No. 3 spots, with 49.2 percent and 46.9 percent, respectively, calling these issues a top concern. More than one-third of respondents (37.8 percent) also said safety and risk management were a top concern facing the aquatics industry. (See Figure 1.)

When broken down by facility type, there is quite a bit of variance in the top concerns, depending on whether respondents were reporting from parks, colleges, schools, YMCAs or camps. (See Figure 2.)

Among YMCAs, while conservation of energy, water and other resources were a concern for 14.6 percent, more named outreach to minorities and other underrepresented audiences (22.5 percent), as well as new programming ideas (19.1 percent) and managing water and air quality (19.1 percent) among the top issues for their facilities.

Top issues also differed depending on the average size of the facility, as measured by its average operating costs. For the smallest facilities—reporting less than $250,000 in average operating expenditures for fiscal 2016, the top three issues were: budgets (56 percent said this was a top issue), equipment and facility maintenance (53.5 percent), and staffing (38.8 percent).

For mid-sized facilities (with $250,000 to $499,999 in operating expenditures), the top two issues were: budgets (55.5 percent) and staffing (53.8 percent). Equipment and facility maintenance, and safety and risk management were the top issue for 35.8 percent of these respondents.

Among the largest facilities (those with $500,000 or more in average operating costs), the top three issues were: staffing (63.4 percent), budgets (51.8 percent), and equipment and facility maintenance (45.9 percent).